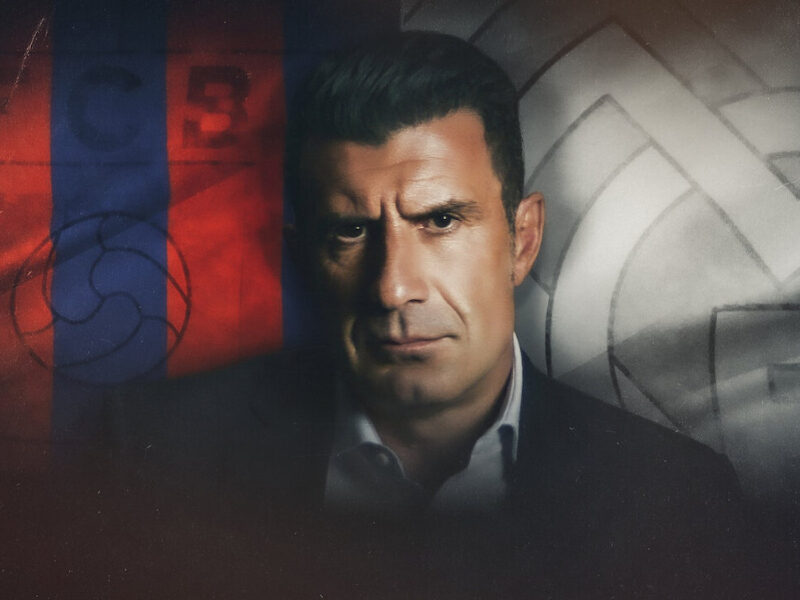 Q&A: Pitch Productions’ Rogers and Tryhorn on a ‘golden age’ of sports documentaries

Streaming platforms have driven explosive growth in the popularity of sports documentaries, making them newly significant for sports organizations.

The Figo Affair: The Transfer that Changed Football hit the Netflix streaming platform on August 25 and is up for a Broadcast Sports Award on November 1.

It tells the story of Luis Figo’s transfer between Spanish soccer giants and bitter rivals Barcelona and Real Madrid in 2000. In Pitch’s words, it’s a “twisting tale of backroom deals, a truly historic sporting rivalry, and a deep cultural divide.”

David Tryhorn, co-director of the film with Ben Nicholas and creative director at Pitch, said they wanted it to “feel like a Hitchcockian thriller,” which might seem rather lofty for a documentary about a soccer transfer but, in reality, is indicative of what the genre has become.

Streaming platforms like Netflix and Amazon Prime have driven explosive growth in the popularity of sports documentary films and series, their significance as marketing and revenue-generating tools has been recognized by sports organizations and agencies as a result, and, in turn, creative and production limits have been swept aside.

Jonathan Rogers, chief operating officer of Pitch International and lead of Pitch Productions, and Tryhorn spoke to GlobalData Sport about how the industry has developed, where documentaries now sit strategically for sports organizations, and what is required to make them successful in an increasingly competitive market.

What factors led to Pitch Productions being launched?

Sports documentaries have only really become in vogue in the last five to ten years. When Pitch Productions began in 2006, we spotted a gap in the market when it came to accessible retrospective documentaries about sport, and we provided it as shoulder programming for sports broadcasters.

We’ve since evolved into a business that can develop, produce, co-produce, finance, and distribute documentary films and long-form series. Today, we work with documentary buyers like Netflix, Amazon, and Sky, as well as with some of the most talented filmmakers in the world.

In what ways does Pitch Productions complement the other parts of the business?

Through our media rights business, advisory services, running of international soccer events, and sponsorship division, Pitch has experience working with elite-level athletes and understands both team and major competition dynamics. As well as giving us direct access to federations and athletes who have a story to tell, this also gives us a level of trust when brokering that access to talent.

When we produced All or Nothing: Brazil National Team, our long-standing relationship with the Brazilian national team – Pitch has been responsible for Brazil’s friendly fixtures over the past 10 years – gave their federation complete trust to open up their dressing room for the first time to cameras.

Archive comes at a huge cost to any sports documentary and inevitably leads to numerous creative trade-offs. As part of our media right business, our expertise in archive enables us to put more of the budget on screen so we can hire better directors, ensure higher production values, and find and use the best archive for more immersive storytelling.

How has Pitch Productions been ramped up since launch and how is that reflected in the wider industry?

Gone are the days when sports fans were content with season reviews or pedestrian profiles of their favorite players. Since focusing on premium documentaries in 2016, we have placed more impetus on development, access, and building relationships with documentary buyers.

In the last three years alone we have produced a feature documentary on Sir Andy Murray for Amazon, films on the most iconic rugby and football players of all time in Dan Carter and Pelé, and garnered critical acclaim for our latest Netflix documentary The Figo Affair.

We currently have a feature documentary on a major football icon in production, another two films in production with Netflix on climbing and cycling, and a four-part documentary series following football agents for Sky that we are producing in partnership with NBC Universal.

To what extent have breakthrough series like All or Nothing and Formula 1: Drive to Survive changed the landscape?

I think it’s fair to say that we’re in a golden period of sports documentaries – between 2016 and 2018, a sports-related film won the Academy Award for best documentary every year. Almost every other week, a club or federation, or sportsperson seems to launch a documentary. And companies and filmmakers who would never have previously touched sports documentaries are all keen to work on sporting stories.

Alongside music and true crime, sport has become a staple for documentary buyers. I think a film like Senna in 2010 initially changed the landscape – here was sport presented as drama – but the All or Nothing and Drive to Survive brands have pushed it to a new level, where sports documentaries are now ubiquitous on every platform and even influence the sport and fanbase. Premium sports films and series are now an accepted part of the landscape.

What level of interest in docuseries is there now from sports organizations?

I think the interest is obvious – the All or Nothing series has alerted most top-level sports clubs and players not only to financial opportunities but to the possibility of building their brands globally. Drive to Survive is a great example of how an entire sport has gained popularity in the US and with a younger audience thanks to a documentary series.

And now other federations have followed suit – the PGA, ATP, and Tour de France are all following Formula 1 into access documentary series. It’s not just a way to build their brands but also a chance to build a new fanbase and change their fan demographic.

To what extent are there benefits for sports organizations of building documentaries into their strategies?

No one wants to be left behind. As previously mentioned, it’s a chance to build global appeal and stand out from their competitors. And so long as sport remains popular, commissioners will continue to want content for sports fans, so everyone wins.

The challenge now is that the market does not become over-saturated. We’re beginning to see a formulaic approach to sports documentaries, which is a concern.

One of the first questions we asked ourselves before making The Figo Affair was how do we make this feel different? How do we take a well-known sports story and make it feel fresh? And so, we quickly decided to make a true-crime heist film out of a football transfer.

How does Pitch expect the sports documentary film and docuseries industry to develop?

There is now more content than ever so we can’t simply expect viewers to tune in – audiences are becoming far more discerning as producers and platforms compete for attention. I think we’ll see a move away from so much ‘authorized’ content. Some of the most informative feedback we had from The Figo Affair was that we managed to gain access to everyone, but we didn’t spare anyone either – it never felt like a puff piece or naked brand-building.

People will naturally tire of the same strands and begin to see through the marketing nature of certain documentaries or hagiographies – I think they will value honesty and authenticity more and more. There is obviously drama that is inherent to sport, and this is naturally one of the factors that make sports documentaries so appealing, but that isn’t enough.

At Pitch, we want to make documentaries that stand out from the crowd and are saying something new, different, and important. From our point of view, the story is still key – there needs to be a story worth telling for us to want to tell it. Ultimately, no different from any other genre, sports documentaries have to matter, and they have to demonstrate why sport matters.

Pitch Productions' latest documentary film, The Figo Affair: The Transfer that Changed Football, is now streaming on Netflix. The film is nominated for a Broadcast Sport Award on November 1.